RNA life is a Spanish Network funded by the call: Redes Temáticas (RED2018-102467-T) born from a previous call in 2016 (mRNA life: BFU2015-71978-REDT). It was originally made up of 9 groups and focused on messenger RNA (mRNA) that now extends to 15 groups, to expand to all kinds of RNAs, new topics and organisms. The 15 groups, from different cities and entities, investigate eukaryotic RNAs from different methodological approaches.

This Network aims to overcome the erroneous notion of RNA biogenesis as a sequence of independent steps with no relation between them. This perspective has traditionally been transferred to research groups that only relate to those of the same subject and/or organization. To solve this problem, RNA life aims to improve collaboration between Spanish groups that study: different stages in the life of RNA, or the same stages but in a different organism or different types of transcripts. Thus, we intend to achieve a significant boost in research at the national and international level of this fundamental aspect of Biology.

The main purpose of RNA life is the formation of an integrated model for the study of the processes related to the life of the various types of RNAs, which: (1) provides durable structures capable of changing the dispersed model of research on this topic in Spain, (2) establish an ambitious, innovative and multidisciplinary program of high-impact joint research activities, and (3) undertake the dissemination of knowledge about RNA and its applications in the scientific community in general. The proposal builds on the success of the previous period in which contacts were established between various groups, endorsed by the publication of 15 joint articles up to date. RNA life intends to extend these contacts with the incorporation of new prestigious groups in the field and create new synergies and opportunities for advancement through an integrative scientific project. 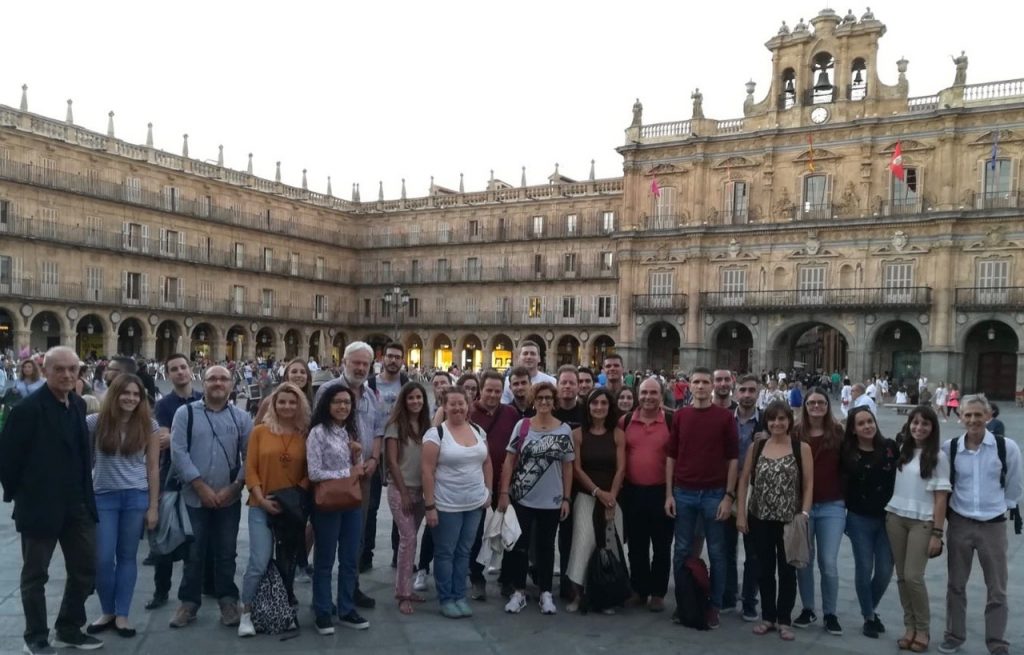 Gene expression consists of coupled and coordinated processes (Komili and Silver 2008). During the last decades, the existence of interconnections between the different stages of mRNA transcription, processing, export, translation and degradation, and of regulation mechanisms by non-coding RNAs (ncRNA) have been demonstrated. Translation requires specialized machinery made up of various ncRNAs and RNA-binding proteins (eIFs and RBPs; Hinnebusch 2017).

The transcription of the eukaryotic genome is carried out by three RNA polymerases (RNAPs; Werner and Grohmann, 2011). RNAPII transcribes most genes: mRNAs and many types of ncRNAs. RNAPI and RNAPIII produce several ncRNAs: the 37.5S rRNA and the tRNAs and 5S rRNA, respectively, essential for translating mRNA. The structures of the three enzymes have been key to uncovering previously unknown details about the transcription mechanism (Cramer et al., 2001; Fernández-Tornero et al., 2010; 2013). Specifically, the structures of RNAPII at various stages of its enzymatic activity, as well as associated with initiation or elongation factors, have made it possible to understand the synthesis mechanism of mRNA (Cheung and Cramer, 2011). A good part of the RNAPII interactions are established and regulated through post-translational modifications of the carboxy-terminal domain (CTD) of the large subunit. During transcription elongation, RNAPII contributes to mRNA maturation (Burckin et al., 2005) by physically and functionally interacting with various general and specific factors (Sims et al., 2004) that stimulate its processivity (Mason and Struhl 2005). The study of these factors has allowed the discovery of unexpected links between elongation and other cellular processes, such as genetic instability (Chávez et al., 2000), protein degradation (Woudstra et al., 2002) and that of pre-mRNAs (Andrulis et al., 2002). In metazoans, most of the mRNA precursor (pre-mRNA) contains non-coding sequences (introns) that are co-transcriptionally eliminated to form mRNA by the spliceosome, a macrocomplex whose essential components are snRNPs (Matera, & Wang, 2014). The process, splicing, is controlled by the elongation rate of the RNAPII (Montes et al., 2012). As it approaches the end of the gene, the transcription complex recruits factors necessary for the termination, 3 ‘processing of the mRNA and for the correct packaging of ribonucleoprotein complexes (mRNPs). This mature form of mRNA includes proteins for nuclear pore recruitment (NPC) (Bentley, 2014,) and transport to the cytoplasm (Nino et al., 2013). Both the NPC, as part of its associated machinery, generate a suitable environment for the regulation of gene expression (Ibarra et al., 2015). The process known as “gene looping”, which promotes the formation of “gene loops, juxtaposes the promoter and terminator regions of genes transcribed by RNAPII near the nuclear pore to facilitate the transfer of RNAPII from the terminator to the promoter, facilitating its recruitment for the reactivation of transcription. The participation of the nuclear pore in the formation of gene-loops also suggests that looping could facilitate the export of mRNA to the cytoplasm (Grzechnik et al., 2014). Most of the ncRNAs transcribed by RNAPII follow the same steps as mRNAs (Fig. 1) and some of them function as regulators of mRNA transcription, processing, translatability and stability (Pérez-Ortín et al., 2013). This adds an additional layer of complexity in the machinery that regulates, controls, and coordinates mRNA life and functionality. Recent data propose that mRNA undergoes a co-transcriptional imprint that conditions all future stages of its life (Choder, 2011), with some of the proteins that accompany the mRNA from the nucleus to the cytoplasm acting as general coordinators of its biogenesis (Harel- Shavit et al., 2010; Pérez-Ortín et al., 2013). The role of these coordinators, including RNAPII subunits (Garrido-Godino et al., 2016), explains the communication between synthesis and degradation and explains the robust homeostasis in response to transcriptional disturbances (Dahan and Choder, 2013; Sun et al. al., 2013) and during changes in growth speed or cell volume that alter the transcription rates of the three RNAPs (García-Martínez et al., 2016; Mena et al., 2017). The mRNAs contain the information encoded in the genome along with regulatory elements that determine the expression of their messages (Lozano et al., 2018). It has also been shown that there is a retrograde cross-talk, from the cytoplasm to the nucleus, mediated by degradation factors of mRNAs (Haimovich et al., 2013)

Protein synthesis is an essential process in the post-transcriptional regulation of gene expression, mediated by ribosomes, tRNAs, and various protein factors. Likewise, ribosome biogenesis is an extremely complex and exquisitely regulated process (Bassler and Hurt, 2019; de la Cruz et al., 2015; 2018; Peña et al., 2017) that involves coordination between the transcription of some mRNAs (ribosomal proteins and biogenesis factors) and that of the rRNAs, thus implicating the three RNAPs. The process, which also includes rRNA maturation mechanisms and export to the cytoplasm, involves some 200 different factors, which process the rRNA initially synthesized by RNAPI (Bassler & Hurt, 2018). This coordination is mediated by the TOR route and by the physical interaction of factors involved in more than one stage (de la Cruz et al. 2018). Therefore, studying the process globally opens new doors to understand the molecular mechanisms that regulate this stage of gene expression (Figure 1).

The basic mechanisms of gene expression in eukaryotes are conserved from yeast to humans. Several direct connections have been established between these protein factors and human diseases (cancer, ataxias, diabetes), which emphasizes the interest in understanding the molecular mechanisms that underlie their dysregulation. Among them, the deregulation of the activity of RNAPIII, and also of RNAPI, as well as the deregulation of the levels of its transcripts, have been correlated with carcinogenic processes and other diseases in humans (Grewal, 2014).

An ambitious study of the different threads involved in gene expression globally requires collaboration between groups from different fields, with different approaches and experimental models (Fig. 1). Our studies will be at the current scientific forefront, exploring entirely new fields of Molecular Biology that affect all eukaryotic organisms. We estimate, therefore, that this Network is in perfect harmony with the Spanish Strategy for Science and Technology and Innovation, whose general objective number IV emphasizes Internationalization and International Leadership, and whose sub-objective 4.2 encourages the “Promotion of Scientific and Technical Research of Excellence ”. We believe that with this project we will generate «frontier knowledge» and contribute to the «development of emerging and cutting-edge technologies», which are part of the aims of this sub-objective.

In the formation of Thematic Networks it is also important to seek a balance between the establishment of new contacts between groups that previously did not collaborate and the robustness that the existence of previous connections between participants provides to the network structure. At RNA Life we seek an adequate ratio between both options. Since this Network starts from the previous existence of another, mRNA Life, several of the groups have been collaborating for years. Other groups only have some previous contact and intend to start common projects. Therefore, the solidity of the structure is guaranteed with a base of previous collaborations and the generation of new scientific proposals between groups. Specifically, one of the advantages of the proposed Network will be the creation of a “horizontal” network of groups that work in similar processes, but in different organisms or pathologies. This type of structure is very productive because it allows the exchange of reagents, strains, experiences and technical knowledge between laboratories that use similar technologies but are not generally known for using different model organisms. For example, the presence of two structural biology groups, one expert in X-ray crystallography and electron microscopy of RNAPs, and the other in NMR of protein complexes: RNA and intrinsically unstructured proteins, will allow integrating biological data in a three-dimensional framework and knowing details of interactions and regulatory mechanisms in RNA life. Interactions between specialist groups at different stages constitute a «vertical» network of the Network.